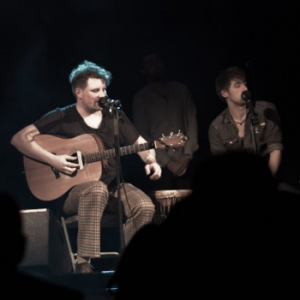 Matt Woosey’s time is now. His eighth studio album, Desiderata, captures the most daring and progressive music of his career. His acclaimed solo shows dart between folk, roots, ambient and electronica.

Tipped by tastemakers from BBC Radio to Classic Rock, and braced for a headline tour across Britain and beyond, 2016 finds Matt looking to the future.

Rewind to the late-’90s,  Matt found himself packed off to a Bristol boarding school with a rudimentary cassette player and a stack of dubious tapes where he was spellbound by shape-shifting power-blues of Led Zeppelin’s debut album and II. “That’s when I fell in love with music,” he says.

Out of the starting blocks, Matt created alchemy with the bare minimum of equipment, needing little more than his neck-tingling voicebox and fluid acoustic guitar chops to tame a drunk mob or command a transient crowd. “For me, playing acoustic guitar in an inventive way that’s different to anyone else is the most powerful thing I can do. I like to do things that turn heads, but at the end of the day it’s all about the songs.”

Professionally, there’s no mistaking Matt’s upward trajectory in recent times. In 2014, his genre-hopping Wildest Dreams studio album was dubbed “a breath of fresh air” by Classic Rock, while his onstage prowess and booming live profile were thrillingly captured on the While The Cat’s Away release (recorded warts-and-all at Bristol’s Gallimaufry venue in 2014).

To his growing fanbase, there is a palpable sense that Matt is building towards something truly special. Desiderata, Matt’s latest album, issued through the RoBar label on April 1st – and toured extensively throughout 2016 – it’s an album whose spark and invention eclipses the tired offerings spat out by the rock mainstream. “It’s hard to say what it’s inspired by,” he says. “And I can’t really tell you what other bands it sounds like. It’s just Matt Woosey, really.”

Find out more at mattwoosey.co.uk/